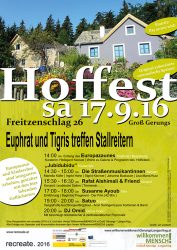 FREITZENSCHLAG. “recreate“ – As part of this event series, which Johannes Wohlgenannt Zincke brought to life 16 years ago, you are invited this year to a very special event, a court festival in Freitzenschlag. Fenced-in, yet open, an exemplary integrative social event.

In cooperation with the Welcome Fellow Human! Association in Gross Gerungs-Langschlag, a court festival will take place on September 17. The motto “The Tigris and Euphrates meet Stallreitern” can be easily explained: “Stallreitern is the name of the field on which the estate in Freitzenschlag stands. The Tigris and Euphrates are at the center of the war zone from which most of the headlines and refugees in the past year have come,” according to the initiator Johannes Wohlgenannt Zincke.

The idea was to organize an event where, if possible, all of those seeking asylum and who are being taken care of here can get involved. “A goal toward which everyone is working, a goal that substantially unites us,” as Wohlgenannt Zincke describes it. “In equal part, however, the Austrians who live here are also active, as organizers, artists, staff, or audience. And it is also important to me to demonstrate a line along which social events in Austria can take place. Integrating, incorporating people into the proverbial whole. In view of our experience, these are details that cannot be expressed clearly enough.”

The festival begins at 2 p.m. with a reception at the specially constructed Europa Fence, which does make access a bit difficult, but is still open. The fence will be transformed into a gallery: pictures will be shown that have been created collectively by asylum seekers from the Gross Gerungs area as well as artists from the region. After that, musical entertainment until late in the evening is on the schedule: the Children’s Choir, music of the Waldviertel paired with classical music and pop music from the Middle East (DJ Omid) and Central Asia. Food and drink from all these regions will be available. Not least, a film by Susanne Ayoub, “Baghdad Fragment,” will be shown.

Johannes Wohlgenannt Zincke on the subject of refugees and asylum seekers: “What I can do is to get involved with the people who have come to Austria, no matter how they got here. Everyone should have a chance. And perhaps that is my strongest motivation. To advocate for adhering to fundamental rights, regardless of origin and situation, and for preserving the dignity of every human being.”