As a director he had a “strong hand.” As a political person he was alert and pugnacious. A man with courage and a backbone. Giving up was out of the question for him. I experience this close-up on one of his most important­–most important especially to him–film projects. Without his tenacity, it would have failed because of financing. To say nothing of all the other kinds of resistance, including the film critics.
Reinhard wasn’t a simple person to deal with, but he was always fair and open, a rarity in that business. I am proud to be the screenwriter for the film “Hannah” (1996).
Friday, February 11, 2022, 21:55 o’clock. 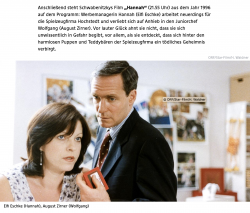 Next on the program is Schwabenitzky’s film “Hannah” (21:55 o’clock) from 1996: The advertising executive Hannah (Elfi Eschke) has recently been hired by the toy company Hochstedt when she immediately falls in love with the junior partner Wolfgang (August Zirner). Out of sheer happiness, she does not suspect that she is unknowingly putting herself in danger, especially when she finds out that behind the harmless dolls and teddy bears the toy company is harboring a lethal secret.