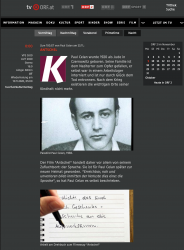 It is a landscape film in another sense as well: it visually interprets linguistic images from Celan’s poems.

The narrator of the film is Klaus Demus, now 93 years old. He met Celan through Ingeborg Bachmann in Vienna and stayed connected to him for a lifetime.