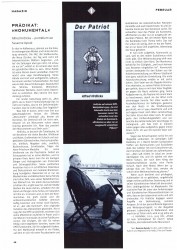 Prole Is Not a Bad Word is a portrait of the sculptor and painter, simultaneous chess player and aficionado, enfant terrible and state artist, vocationally trained dental technician and academically educated art professor, and self-professed Euro-Stalinist Alfred Hrdlicka, a self-deprecating Austrian patriot of international fame.

The program’s title is a quote from the artist. The portrait was made to honor his 75th birthday in 2003.

This feature lives above all on words from Alfred Hrdlicka’s own mouth. There is no commentary in the form of an explanatory voiceover. Only the music makes a comment: musical quotations from Brecht’s plays Threepenny Opera and Mahagonny, workers’ songs, Red Songs, and right-wing hymns create connections or transitions and counterpoints.

The third sound element in the feature are original historical recordings, for example, a speech by Engelbert Dollfuss during the revolution of February, 1934; a campaign speech by the Socialist Adelheid Popp in 1930; the national anthem of the Austrian corporative state (“… a dead man leads us on …”).

Not all stages of his life are presented in detail. The emphasis is on the connection between politics and art that above all distinguishes Alfred Hrdlicka.