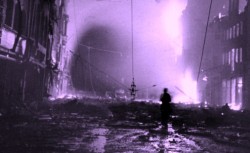 ILI
(in a monotonous singsong, in the distance)

Your father has a handsome ring
set with a green jewel glistening.
Please let me have just one small glance,
I’ll be so glad I’ll do a dance.
And let this pretty doll of mine
into your garden, small and fine.
Then you will alone possess
the doll with all its fancy dress.

HEDWIG
It’s bitter cold. I could use some gloves. October seventh. If this is how the autumn’s starting, what will winter be like? One of those stoves they’re advertising, that you can cook on too, who’s going to pay for it? And what am I supposed to fuel it with, and what am I supposed to cook on it? The ad doesn’t say anything about that.

Look at that little girl, Fredl. Sitting in the debris like it was her dollhouse. (moves away) Below freezing, I swear, the temperature’s no higher than that today …

Ili’s song distorts into dissonance. A cuckoo calls on the radio. A warning siren is heard and then suddenly goes silent, as does Ili’s voice. Only her breath is still audible.

HEDWIG
(coming closer) Why, she’s still there! (calls) You, over there, aren’t you going home? Aren’t you getting cold on that stone? And your – wait a minute, Fredl! … That’s not a – Jesus! Somebody’s got to – right away – come on, Fredl, quick! (walks quickly away)

ILI
(whispering) … please let me have just one small glance, I’ll be so glad I’ll – (fades out)

The great war is over. The city is full of ruins, hunger, and hardship. On the street, a girl with a dead baby in her arms. The policeman Karas takes her away for questioning.

KARAS
Get up! Listen to me, I’m talking to you!

HEDWIG
A child, an infant! And I thought it was a doll. And it’s dead too. Hugging a dead baby. I thought my heart would stop. Fredl, I can’t get over the shock.

KARAS
Get up! Make it snappy.

KARAS
Is that your child?

KARAS
What happened to this baby?

ILI
I don’t have any.

HEDWIG
This is scandalous! Young people today. The best ones never came back from the war. The riffraff survived. Fredl, let’s go, I can’t bear to look at this anymore. – The poor helpless thing, all blue. She was grabbing it by the neck, like a rabbit. Dead, yes, but not of natural causes!

She calls herself Ili. She has no papers and she tells of a cellar where she took shelter. Anna, who worked the streets for cigarettes, was staying there as well. Ili was supposed to take the baby for a walk whenever a man visited Anna. Karas tries to find out what happened to the baby and whether Ili is really the person she claims to be.

KARAS
Story time is over! Your name is Anna Förster and you’re 16 years old. The resident register burned up, but we will find your address, it’s just a matter of time.

ILI
The house isn’t there anymore.

ILI
There’s nothing in there but a book of fairy tales. I read them to Hinkel. And to myself, too, it’s a nice book. We didn’t have any books, there. I haven’t held a book in my hands since I left home.

KARAS
So, you can remember after all?

ILI
During the air raids in the cellar I was always so scared. The worst thing was when the lights went out. Then I couldn’t take it anymore, I went upstairs and watched. Up there on the hill you could see them coming from the west or the south. Howling and whistling. I can still hear it at night when it’s quiet. Then the explosion. Horrible but somehow beautiful too.

KARAS
That was in the home, you’re talking about the home.

ILI
They arrested my mother. She was passing out leaflets, with the underground, like my father, but he was long gone, I don’t know where, and Mama burned my papers before the police came and told me I was on my own now, that I had to go into hiding. But it was too late. They took her away and me too.

KARAS
Burned your papers? Are you making things up again?

ILI
You can’t force me. I’d rather die than go there.

“I like what’s archaic about the text, the evil that dwells in everyone. From the way the characters behave you know there will be violence and war. The characters are both victims and perpetrators. Unredeemed creatures. The play is based on a specific wartime situation, but it can be transferred to any hostile crisis situation. The language is convincing with its almost lyrical concentration.”

“Law and order, does that mean anything anymore, Officer Karas asks. Who can tell anymore? The great war destroyed all rules. Rules of coexistence, of cooperation. And hope lies in ruins as well. Who is a perpetrator and who is a victim in this devastated world? A drama that tells of people who become guilty through no fault of their own. Switched identities as an attempt to understand what you’ve been through, to heal psychic wounds. Not a whodunnit, but a special kind of detective story.

The author’s literary signature, a poetic view of characters who attempt a new beginning under the burden of their histories.”