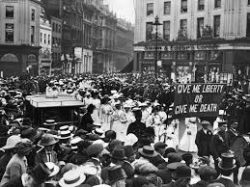 Give Me Liberty Or Give me Death *

SATURDAY MARCH 16, 2019, 3:00 p.m.
With her audio drama “Brot und Rosen” (Bread and Roses; ORF 2019), Susanne Ayoub looks at the beginnings of the women’s movement in Europe, tracing an arc from the French Revolution to the Russian Revolution. She will quote and read from the writings of revolutionary women, suffragettes, and women who fought against sexual double standards.

Rosa Mayreder 1878-1938
Author
Throughout the history of human development, women appear in a strange twilight: now superhuman, now subhuman; half divine or half diabolical; as a prophetess and Sibyl endowed with the ability to work miracles, or as a witch and sorceress possessing demonic powers. Oppression to the point of slavery and glorification to the point of worship. 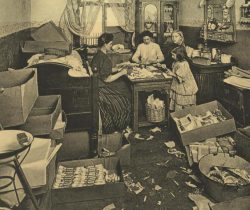 Ottilie Baader 1847-1925
Homeworker, Social Democrat
When I was working, a small clock stood in front of me, and meticulous care was taken that this dozen collars did not take any longer than the last dozen, and nothing could make you happier than saving a couple of minutes. And as the years passed by you didn’t realize you were young and that life hadn’t given you a single thing.

Olympe de Gouges, 1748-1793
Writer and Activist during the French Revolution
Preposterous, conceited, scientifically bombastic, and degenerate, the men in this century of Enlightenment and ingenuity, from a position of the coarsest ignorance, are trying to rule despotically over a gender that possesses every possible intellectual capacity..

Mary Wollstonecraft, 1759-1797
Author
How grossly do they insult us who thus advise us only to render ourselves gentle, domestic brutes!

Alexandra Kollontai, 1872-1952
People’s Commissar during the October Revolution, the first female cabinet minister and later the first female diplomat of the Soviet Union
Because they are lonely, people tend delude themselves in a predatory and unhealthy manner that they will find a soulmate of the opposite sex. They see cunning eros as the only power that can dispel the darkness of loneliness, even if only for a while.

Let us recall this statement: “The father is not related to his illegitimate child.” Who could have ever come up with this monstrous mockery of all natural and honorable feelings?