The Laxenburg Public Library & Media Library invites you to a reading by the author Susanne Ayoub from her novel “The Jewel Garden”.
The event begins at 7:00 p.m. at Wiener Straße 2a. 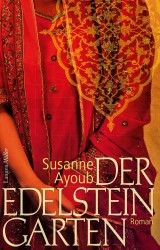 A FAMILY DRAMA WITH the feel of a thriller

For Laura, Christmas Eve 1955 begins like so many others, with discord in the family home. But then an unexpected visitor shows up: Younis, a young man from Baghdad. And all at once everything changes. Before the year is out, Laura and Younis are a couple. Laura leaves Vienna, her parents, and her friends, and follows Younis to Baghdad.

In the Garden of the Gods in the epic of Gilgamesh, the trees, leaves, and fruits are made of precious stones. There are no thorns, only crystals; no darkness, only sunshine. For Laura, the path into her new life seems as fabulous as this vision. The world of the Near East with its colors, fragrances, and sounds immediately draws her under its spell. But beyond the magnificent mansions of Baghdad, where the affluent live in isolation, this idyll comes to an end. The assassination of the royal family topples the Iraqi monarchy. Alone at home with her small child, Laura experiences the outbreak of civil war. Nothing remains as it was. Younis too becomes a different person. He leads a second life that Laura is not allowed to know about. She realizes she has married a stranger.

Susanne Ayoub tells the story of a brave young woman’s attempt to gain access to a foreign culture, of differing worldviews and social norms. She describes the high and low points of a marriage and sheds light on the background of a politically dramatic time, from the assassination of the Hashemite royal family to the revolutions and civil wars that followed.