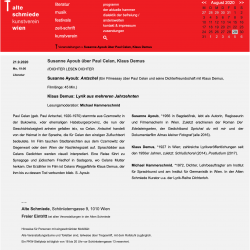 In 1970, after years of serious mental crises, Paul Celan drowned himself in the Seine.