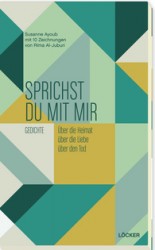 Poems
With drawings by Rima Al-Juburi

“You Talking to Me” deals with the ideas and emotions of homeland, with identity, finding traces, and memory.

The sky above Baghdad

belongs to the stars,

The sky above Baghdad 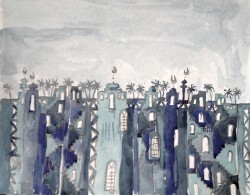 A PHOTO GOES ROUND THE WORLD

The man on his back

looks into the sky

dynamite in his hand

A perpetrator. A victim.

He died for justice

for a better world

The poems are illustrated by the painter Rima Al-Juburi, who shares a story with the author: both of them were born into Muslim and Christian family arrangements, and both now live in Vienna.

Rima Al-Juburi, born in Wels, Austria, in 1968, grew up in Baghdad. After studying architecture at the University of Baghdad she moved to Vienna, where she lives today as a freelance painter and art designer. She established the arts and crafts studio “Seven Eyes“.