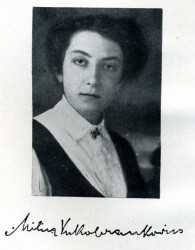 Journalist. Resistance fighter. Murderer? Milica von Vukobrankovics, born in 1894, was the last scion of a noble Serbian family that had already played a significant role at the Battle of Kosovo. Shortly after the end of World War I, Milica was at the center of two spectacular court cases. She was indicted for attempted murder by poisoning.

In Milica Vukobrankovics herself we must see both a piece of Vienna and a piece of the Balkans. Her ancestors were not choosy about the means when it came to solving unwanted conflicts. In her homeland, blood vengeance was the rule, even for disappointment in love. — She emerged from prison completely shunned by society, pauperized and careworn. But hardly had she regained an income, a profession, a society, and a sphere of influence when she resorted again to poison. A person who acts like a witch and looks like a lady. — Femme fatale! Siren! Fifteen marriage proposals during the trial! — The prisoner’s dock becomes a director’s rostrum from which she conducts the trial! —

The judges, who for almost a year have been reading the name Vukobrankovics in connection with the words murderess and poisoner, necessarily approach the trial with a firm preconceived conviction, so that the prosecutor has an easy job of it.

The motive of disappointment in love remained unproven, and she did not make a confession. After her release, she changed her occupation and her name. As Elisabeth Thury she became a journalist and joined the Social Democratic Party, and when the party was outlawed she entered the resistance.

In 1939, after a year of confinement by the Gestapo, she was transferred to the women’s concentration camp at Ravensbrück. By the end of the war she had risen to the status of director of the camp police, which many viewed ambivalently.

(various distances from the microphone, various tempos and volume; exterior ambience, only the final sequence interior)

Domineering! — More Catholic than the pope. — Her blows: painful and targeted. — — She used and abused her power. She had totally shed her communist past. — She didn’t hit, but she rarely did anything helpful for others either. — Her remarkable appearance: a big head with gray hair in an Eton crop, a big nose and an awful voice. She had no neck. Her somewhat hunched back sat right beneath the back of her head. — She had once been accused of murdering her husband, but was acquitted on the basis of mitigating circumstances, in fact by the former mayor Seitz, who was also in the cell block. Once when Thury stood waiting outside the cell block door, he was just being let out to take a walk. With all the charm of his old Franconian gallantry, he doffed his hat to her, and Thury slumped under this chivalric gesture. She had probably long forgotten precisely this gesture. She had been extraordinarily coarsened in the camp.

Yet the inmates could not figure out whether Thury’s behavior was part of her double-game strategy or whether she was actually cooperating with the SS.

When the Austrian Press Agency was founded, Elisabeth Thury’s third career began. She became one of the most influential journalists, known even beyond Austria’s borders. The defamatory rumor that she was a murderess followed her until her death in 1973.