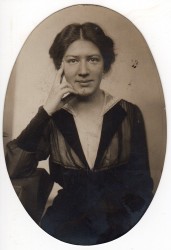 The name Käthe Leichter is associated with the golden age of Austrian Social Democracy. Few are still familiar with her life and work. Early on she was committed to improving the education and occupational situation of women. Her studies on women’s work in the First Republic are groundbreaking, and her analyses and demands are disturbingly relevant. In 1934, together with her husband, the journalist Otto Leichter, she founded the Revolutionary Socialists. In 1942, this Jewish resistance fighter was murdered by poison gas in the Bernburg/Saale concentration camp.

The portrait of this pioneer of the Austrian women’s movement in dramatic scenes and narrative passages was produced by the ORF to mark her 120th birthday.

Döbling is usually known as a noble district, as the exclusive neighborhood of the rich. People have no idea of what sort of slums were there, especially during the war. Our children came from two parts of the district to the daycare center there, particularly from “Crimea,” as it was called, the proletarian quarter, which extended from Kaasgraben to Krottenbachstrasse. That is where the two big factories were: Gräf & Stift and Bensdorp. Workers lived there, but at that time there were also many from the lumpenproletariat, known colloquially as Crimeans.

Exterior ambience. The bell of the Crimea church is ringing. Children’s voices.

The children were better off than those in Favoriten or Ottakring, because they were closer to the Vienna Woods and had better air; they were worse off because they were not affected by the solidarity and self-help of the other proletarian districts. Each was consigned to themselves and their own hardships. The mothers were servants, washerwomen, and seamstresses; the fathers were used for occasional labor. For the children, the world was divided in two: the world of the masters, from whom occasional crumbs fell, the world of glamor, luxury, and affluence that they could watch through barred windows; and their own impoverished world full of hardship. What a job it was to get my otherwise impudent boys to give up submissive phrases like “At your service” and “God’s blessings to you”!

The piece was originally written for a staged reading performance marking the 70th anniversary of Käthe Leichter’s death in 2012. It was performed by the author in the Parliament, the library of the Workers’ Chamber, and other locations.