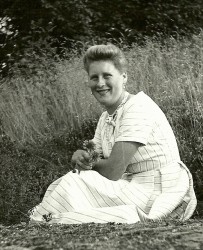 The story of the farmer’s daughter from the Lower Austrian countryside who fell in love with a businessman and came to Gross Gerungs, where in those days the streets were not yet paved, the farmers went shopping in a horse cart, and the steam train from Gmünd made its last stop.

Gerungs was at the end of the world. How she learned to run a general store in a cramped space with her husband, her in-laws, and two small children … Today the former grocer sits at the cash register in her son’s supermarket. Occasionally, when time permits, she also writes poetry. And she is not one bit nostalgic.