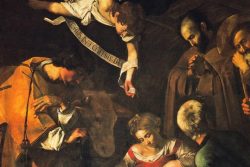 https://www1.wdr.de/radio/wdr3/programm/sendungen/wdr3-kulturfeature/caravaggio-102.html
The production will be available for streaming and downloading on WDR 3 until October 18, 2020

An ORF production in cooperation with WDR (West German Broadcasting) 2019

An angel falls from heaven. The baby is lying on the bare floor. His mother sits before him. She seems weak, weary, resigned to her fate. The men stand around her. All of them are looking at the child, and even the ox pushes forward. Only the man at her side does not look at the baby; he turns away, questioning?

The woman is young. The man at her side seems much older. His hair is nearly white. Or is this an effect of the light falling on him from above? Caravaggio’s famous light. He introduced this radiance to the art of painting. La Luce del Vero, the light of truth.

“The Caravaggio Mystery” begins on a stormy night in Palermo in October 1969. The altarpiece of the Oratorio di San Lorenzo depicting Christ’s birth, painted by Caravaggio, has disappeared. Like the famous chiaroscuro technique in his painting, Carravaggio’s life was marked by light and shadow, and so this brazen art theft befits the artist’s dramatic biography. 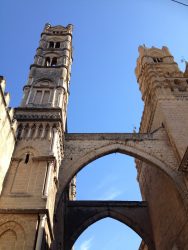 Ayoub’s drama combines the story of the theft and the subsequent intensive and often dramatic investigation into the crime with scenes from Caravaggio’s life: his years on the run as a murderer fleeing from the papal ban, until shortly before his death in Sicily, when he paints one of his most moving pictures: the Natività.

For fifty years Interpol has investigated without success. The Caravaggio painting never turns up. Has it been cut to pieces and taken abroad, hidden in a pigsty, or destroyed?

Is it hanging in the living room of a secret art lover? Was it buried with a Mafia boss? According to the Sicilian Mafia expert Maria Teresa Galluzzo, who guides us through the play, only one thing is certain: the Mafia organized the theft. No one else could have carried it out so boldly and flawlessly.

[Photos of cast and production]