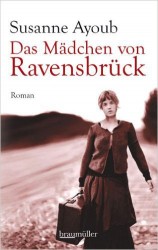 1934. Vienna is wracked by civil war. A little girl, eight-year-old Leni, moves amid the upheaval. Tanks besiege the housing complex where the members of the resistance are entrenched. Leni walks past them with a heavy milk can full of soup and dumplings for the fighters. Nobody stops her.

It is the first illegal activity she can remember. Her mother sent her.After her mother’s death, fifteen-year-old Leni takes over her work with the Red Aid. A year later she is arrested. Her group has been betrayed.

Only her youth saves her from the gallows. She ends up in the Ravensbrück concentration camp.

Leni survives and returns to her hometown, devastated Vienna, where things haven’t gone well for people, where no one wants to hear what happened in the camps, just as earlier they did not want to see the misdeeds the Nazis committed in plain view.

Any resemblance to persons living or dead is not coincidental, Susanne Ayoub writes at the beginning of her new novel. It deals with the better Austria, the fates of Austrian women in the resistance against National Socialism.

“Walter,” Leni said in a firm voice. She was sitting on the interrogation seat in front of the desk, with him behind it, by the open drawer from which he took his whip from time to time and turned it playfully between his fingers. Now he let it fall onto the desktop. It made an ugly, metallic noise. Leni didn’t look at it. She didn’t want to think about the blows. He had to believe her. If he sensed her fear, it was all over.

“That is the name. The man who pulled me in there is named Walter.

“Aha.” He stood up and came over to her. “You slut.” He relished stretching out the word.”Walter then, what did you get up to with that fellow? Did you do it with him?” He grabbed her by the arm and shook her. “There’s a lot of Walters. Walter and then what? And don’t you dare lie to Schiller again!”

He yanked her up by the arm. “Yeah, why not just say so, you bitch? We haven’t been wasting our time. Walter Suchanek.” He pressed the bell button.

“That is a confession. Now you’re going to tell everything you know. But make it snappy.”

Leni nodded in anguish. She felt the dampness on her thighs. She wanted to close her eyes, to be far away from this horrible person, who would only mock her in her distress. Now he glanced at the seat of her chair, the red spot she’d left there. Between her legs, blood trickled to the floor.

“Disgusting!” Revolted, he pulled his hand away from her. “You filthy bitch, you’re going to clean that up! Make sure it’s gone or I’ll break your back.”

He yelled until the door opened and his colleague, the one who had knocked her tooth out, looked in. “Is she causing trouble again?” he asked eagerly.

Schiller went back to his seat at the desk. “A little memory helper like that works wonders,” he answered. “Now she’s thought of something after all. We put it down in writing.”

He cast a surly glance at Leni, who was trying to wipe up the blood with her handkerchief.

“But first give her a cleaning rag. What impertinence!”